The “Dala Horse” is typically a toy-sized horse carved from wood. They have been made and played with at least since the 16th century. The name comes from the Swedish province Dalecarlia, where they were originally crafted. The typical color and pattern of the artifact are derived from the traditions of the area.

Horses were commonly used as a means of transportation and in farm work, and so, as toys, they also became a big part of kids’ play. It was expected that fathers worked as lumberjacks at least a part of the year. It became their habit to carve miniature horses in their leisure time to take back to their children.

The “Dala Horse” became so popular that they began to be carved for other families to buy. What started as a source of extra income for many slowly become a whole industry. The brothers Olsson started to produce these horses in 1939 in Nusnäs, Sweden. The “Dala Horse” rose to its current fame after the 1939 World’s Fair in New York. The exhibition presented a massive 2.8 meter high, traditionally painted horse, a work of art that melted everybody’s hearts. Nowadays the horses are still used as toys and as part of the decoration at home. 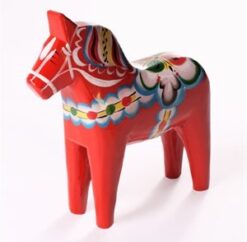 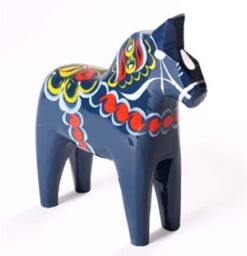